And so, to keep you from falling victim to these blunders, here are some things I’ve recently learned:

Curries in the slow cooker = proceed with extreme caution. 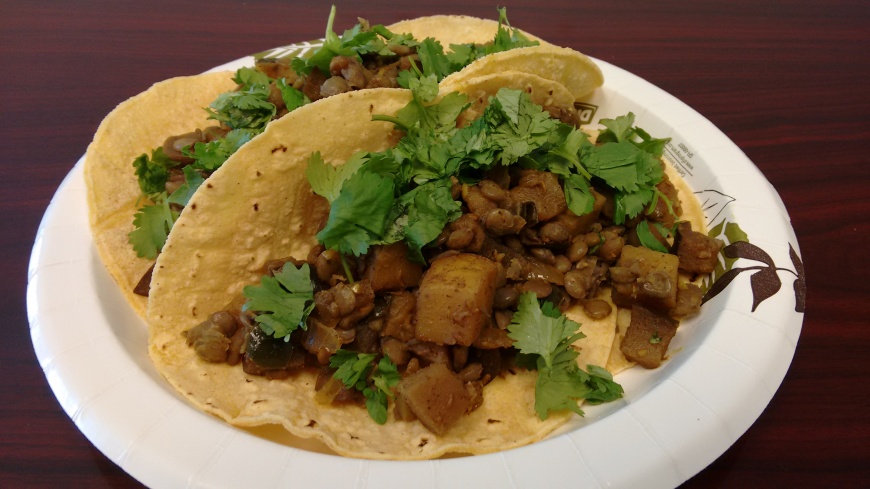 Oh Lord, Kaki, I slogged my way through SO MANY SERVINGS of two eggplant curries I’d attempted in my slow cooker.  Why did I make back-to-back eggplant curries if the first one was so awful?  Because I am stubborn and really, really wanted this particular cookbook* to be amazing.  Though the second attempt (adding potatoes and garam masala, always a good idea) was improved, in neither instance were the spices really able to dissolve into the sauce, and the final dish was on the gritty and bitter side.  Ugh.  (Making it into tacos, though, as above, helped the cause.)

As a committed omnivore, I’m not terribly shy about adding meat to otherwise vegetarian dishes.  It frequently adds that bit more fat, and with it richness, that can really put a dish over the top.  Well, not this phenomenal Chana Palak recipe.  I tried to substitute some sausage I had in my freezer for the chickpeas to this dish, because hey, I need to use it up, it might really beef up a vegetarian dish nicely.  Sigh, not this time.  It was tasty, but nowhere near as good as the original dish.  Next time, I won’t deviate. 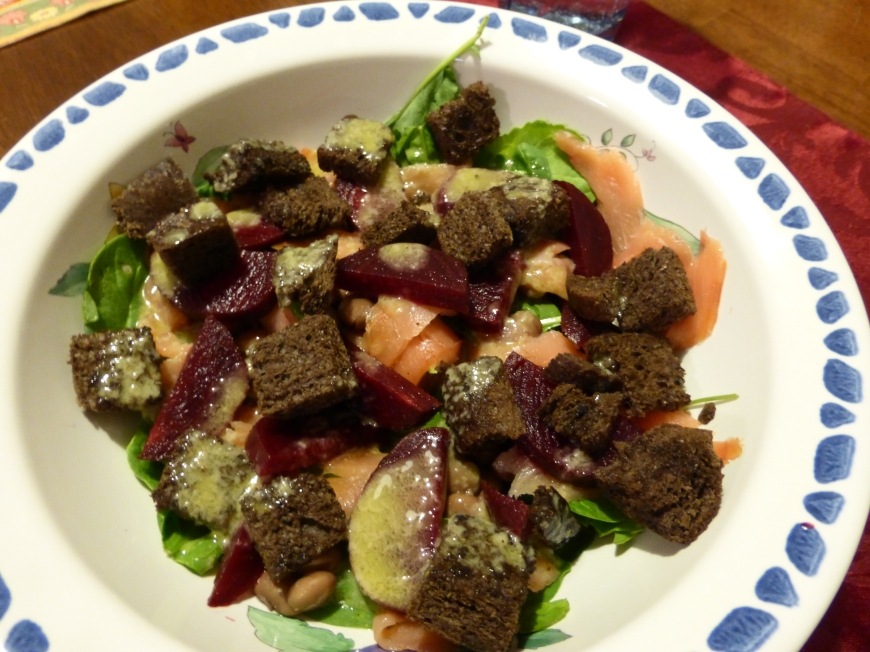 The October Cooking Light issue has a really good composed** salad with beets, smoked trout, quinoa, a mustard-y, horseradish dressing, and pumpernickel croutons.  Pumpernickel croutons!  Inspired.  I love me some pumpernickel (just try not to love a tuna fish sandwich on pumpernickel, World, I dare you).  And I’d forgotten that beets could be easy: I just bought pre-roasted ones.  Now, would raw beets have been cheaper?  Yes.  Would they have been three-times as much work?  Also yes!  I found mine in the refrigerated case in the produce section, but growing up we ate a ton of canned beets; I need to give those a shot again.

Also, my version of this salad was good, but pretty different from the CL version. I couldn’t find smoked trout, so used smoked salmon (goodgoddelicious).  I didn’t have any quinoa on hand, but did have a ton of pinto beans I’d just cooked up, so what the heck, I threw them in.  I also didn’t have horseradish on hand, and so my dressing was really just a mustard-y dressing.  Good, but I can’t help but imagine that the recipe as written might be a little more, er, refined.

You really can use spaghetti squash in place of traditional spaghetti… in some instances. 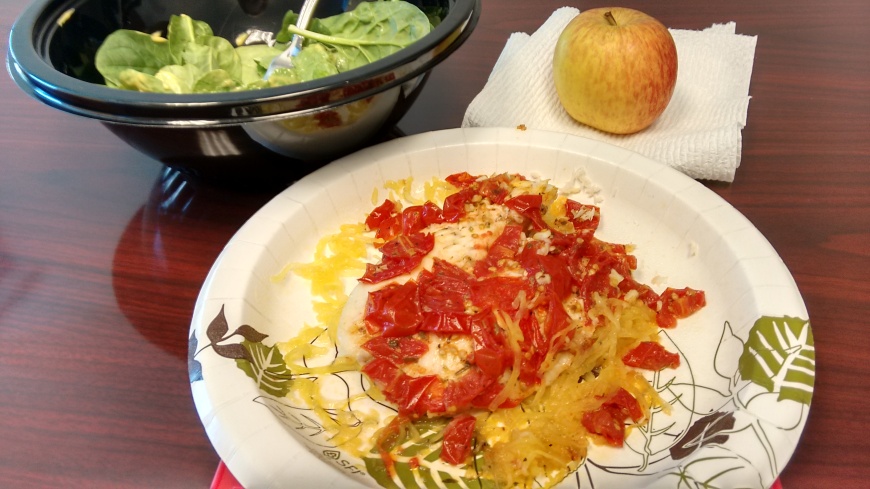 Here I think “delicate” is the name of the game.  Spaghetti squash under marinara and meatballs does NOT work for me; the squash seems watery and wussy compared to the other components.  But this amazing baked fish dish, which I usually serve over spaghetti noodles, was excellent over spaghetti squash.  I did allow the spaghetti squash to dry out a little bit (spread it out on a cookie sheet while it cooled), which I’m sure helped on the watery front as well.  This was one of the best things I made recently (despite its, ahem, interesting photo).

Don’t put too much rice in chili.

This one sounds pretty obvious, right?  Well, I like to use this excellent guide when I’m making a clean-out-the-fridge-and-pantry veggie chili, but hadn’t used the suggested rice addition before.  And it’s good, don’t get me wrong.  But… I used a lot.  Like, the max amount suggested, and then I found some already cooked rice in my fridge and was all, “Heck, I’ll just throw this in, too!”   Too much rice, Caitlin, too much.

I love to bake.

I knew this, but when summer rolls around I don’t seem to bake as much.  Now that fall has officially begun***, I have been baking up a storm.  I made this apple cake, which I wanted to be life-changing and was only good.  Cooper and I made this apple tart, which I wanted to be life-changing and was only really good.  I made baked apples ala Alton for my parents, which was super good but really needed some vanilla ice cream.  And I made a third attempt at these brownies, whose flavor is absolutely perfect, but whose texture I cannot get to work for the life of me.  The cool oven and the teeny amount of flour mean you end up with really delicious batter.  It’s worth tinkering with, but I had hoped that it would eventually just, you know, magically work of its own accord.

Here’s to learning, Kaki, and to better dishes down the road,

*I won’t name the cookbook itself because, you know, if you don’t have anything nice to say… But I will say, if you ever happen to pick up an Indian slow cooker cookbook from the library, let me know.

**This term is so funny to me.  I always picture an exceptionally calm salad. 🙂