My, there is so much to talk about. So many dishes to tell you about! I had a lovely day of full-on Meyer Lemon Experimentation earlier this month; it was a revelation, and will have a full post of its own very shortly*.

But seeing as you’re doing the vegan thing these days, many of those recipes won’t actually interest you, or may interest you but be rather inapplicable. Thankfully for your visit last weekend I had time to find recipes that would suit all of the necessary factors: vegan, delicious, and oh-my-word-is-winter-over-yet-please-where-is-something-fresh?!?

This soup was a gamble, as we discussed. I veganized it by… just not adding cream. To a soup. That calls for water instead of broth. Yeah, could have been a disaster; I’m SO excited that, instead, it was delightful!

I hope, as spring just barely approaches, you find yourself with nothing but leeks and potatoes and beans in your house, and decide to relive our lovely lunch. It could not be more apropos. 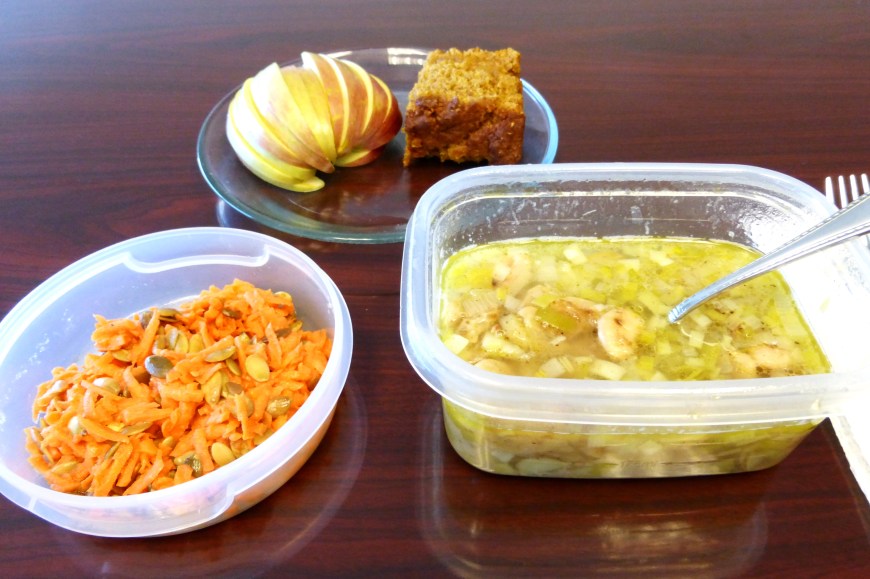 Okay, so this is my lunch of leftovers at work on Monday. Because I didn’t get pictures during our actual lunch. Also, full disclosure: I ate in the conference room; that in no way resembles my actual desk.

Adapted generously from Vegetarian Cooking for Everyone and 101 Cookbooks

Cover a sheet pan in a triple-layer of paper towels.  Drain and rinse the beans in the sink, then pour them out in a single layer on the paper towels to dry.  Set aside.

Soak the leeks in a large bowl of cold water for at least 5 minutes (while you prepare the potatoes).  Lift them out with a strainer, leaving behind any dirt or sand.

Slice the potatoes into thin slices about an inch square. If using fingerlings you can slice the whole potato, otherwise halve or quarter them before slicing.

In a large Dutch oven or soup pot, heat 1 tablespoon of oil over medium heat.  Add the leeks and potatoes, and stir to coat in the oil.  Cover, turn the heat down to low, and let cook for 10 minutes.

Remove cover, and give the leeks and potatoes another stir.  Add the water and salt and bring to a boil.  Then partially cover, lower the heat to medium-low, and simmer until the potatoes are just falling apart.  For me this took about 20 minutes, but the original recipe says 35; it’s just a matter of potato thickness.  Smoosh some of the potatoes against the side of the pot to thicken the broth a bit.  Taste, seasoning with a little salt and pepper as needed.

While the soup is simmering, fry-up your beans: in a 12″ skillet, heat 1 tablespoon oil over medium heat.  Take a paper towel and blot the beans as dry as possible on the sheet pan.  Put half of the beans in the pan, and let them fry undisturbed for one minute**.  After one minute, flip the beans to fry up on the other side for another minute.  Remove fried beans to a plate and repeat the process with the remaining oil and beans.  Once all the beans are fried, toss them with the lemon zest.

Serve with the beans spooned on top of the soup.

I’ll post the carrot salad we had alongside it ASAP.

Hope your week has started well!

*As soon as I remember to get the pictures off of Cooper’s camera! Doh!

**The beans are going to freak out.  They will sputter.  They will pop.  Some of them with basically explode.  That’s because they are super soft and filled with water that’s becoming steam and bursting out of their skins.  Home-cooked beans shouldn’t do this as much, as they tend to be firmer and less waterlogged, but even so, just know this is going to happen and all will still be okay, even if you end up with little bits of butter bean kind of all over your counter.