Kaki, I had such a lovely weekend last weekend!  I went up to Dallas to see my brother graduate from Guildhall.  Masters degree time, das’right, go Nate!

When we got back from Dallas we dropped my Grandma off at her house and as we were leaving she handed me a grocery bag.  “I can’t use these onions before I leave for New York.  Will you use them?”  Yes, Grandma.  Yes I will.

After a ton of searching, I decided to use this recipe as my guide.  It was based on America’s Test Kitchen, so it must be good.

First, you slice up a ton of onions.  America’s Test Kitchen’s recipe is adamant that you slice them “pole-to-pole” to get sort of tapered wedges, instead of slicing sideways into exact half circles.  They said they hold their shape better that way.  Good to know.

Then sliced onions, butter and salt go into a dutch oven (or other oven-proof pot).

Cover the pot and bake in a 400 degree oven for an hour.  Then, it should look something like this: 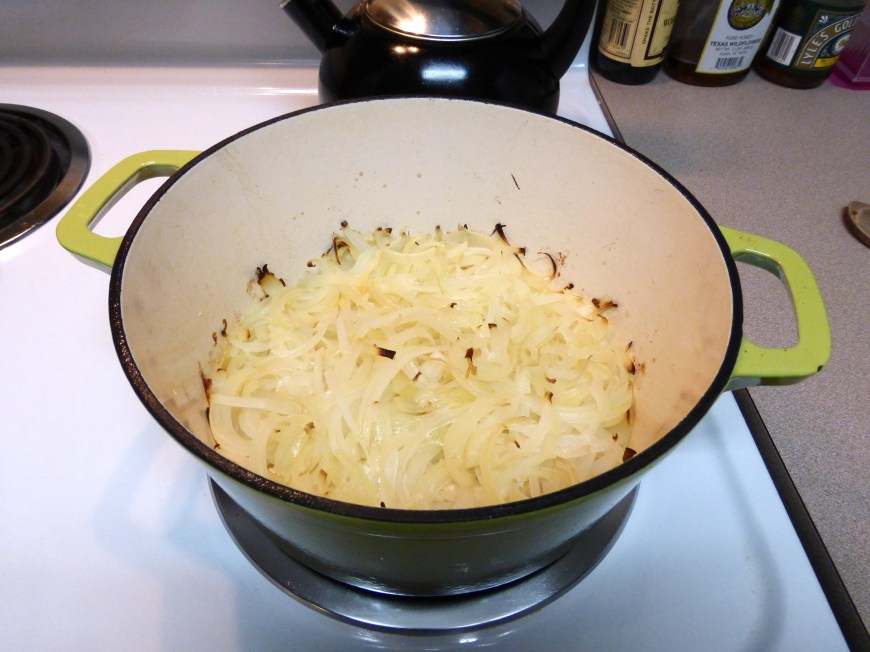 After a good stir, return the pot to the oven with the lid only 2/3’s of the way on, to let some moisture escape.  Can’t get caramelized if they’re soggy!  Let them bake like that for an hour-and-a-half, taking the pot out to stir a couple of times for good measure.

When time is up, remove the pot from the oven, and transfer the onions to a cutting board.

While they’re cooling, you can combine your final flavoring ingredients:  red wine (I actually used the last of a bottle of ruby port), water, sugar, red wine vinegar, and some dried thyme. 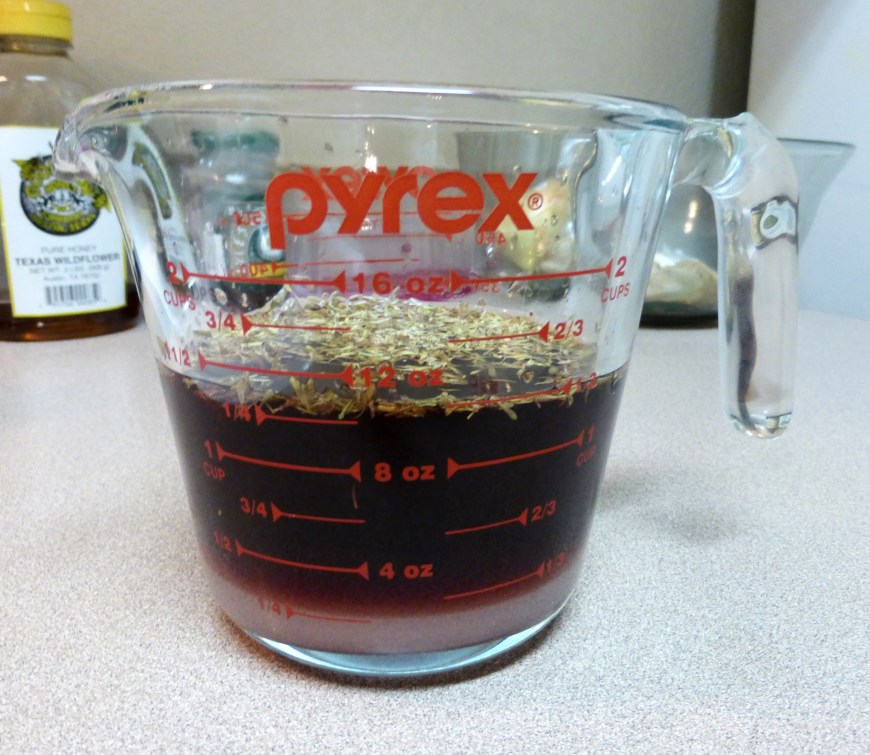 Once the onions are chopped up, return them to the pot.  Place the pot on the stove over medium heat.  Add the wine-vinegar-sugar-y goodness and give it all a good stir, scraping any browned bits from the bottom and sides of the pot.  Let this simmer for 10 minutes or so, until it has reduced enough that you can drag a spoon through the onions, and in the time it takes to take a picture, the liquid doesn’t cover the trail.

Salt to taste, let cool and refrigerate, and you’re good to go!

Coat a large dutch oven with non-stick spray (I like canola oil spray).  Add the sliced onions, butter, and salt.  Cover and bake for one hour.

Remove the pot from the oven, stir, and return to the oven with the lid vented.  Bake for 1.5 hours, stirring twice during that time.

Transfer onions to cutting board and let cool slightly.  When just cool enough to handle, chop the onions into half-inch pieces.

Return the onions to the dutch oven.  Place the pot on the stove over medium heat.  Add the port (or red wine), water, red wine vinegar, sugar, and dried thyme.  Stir it all together, using the wine mixture to deglaze the pot.  Gently scrap the browned bits from the bottom and side of the pot.

Let this mixture simmer for 10 minutes, or until liquid has reduced to desired consistency.  Use immediately or cool and refrigerate for future use.  Can also be frozen for longer storage.