Kaki, I’ve cooked a whole freakin’ lot these past two weeks, it has been great.  But alas, I forgot to take pictures of most of the meals I made!  Also, I honestly didn’t change too much from the original recipe on a lot of them.

Now, did I stick to the recipe verbatim?  Yeah, um, no, we know I’m almost incapable of doing that.  So I want to share the links and my notes on the best of these recipes, because these are now officially Caitlin Tested And Approved.

I’ve made this twice now and I’m going to file it in the “Cheap, Quick, Easy, and Tasty” recipe file*.  The fish is the most expensive part, naturally, but I made this yesterday before going over to Cooper’s, and the guy at the fish counter recommended some cod that was $6.49/lb, pretty reasonable as fish goes.  And one pound made three good sized meals served over spaghetti, so you know, we’re talking under $3/person here.  I always up the salt for Beth’s recipes, and I dressed the noodles in a bit of olive oil, but other than that, the recipe is fabulous as-is.

As a Smitten Kitchen fan, I know you saw this recipe, and I am here to say, “Go for it.”  I substituted 1/3 cup wheat germ and 2/3 cup flour for the 1 cup flour called for, and it still turned out great.  Squeeze in fiber and protein where you can, I always say.

Sarah brought this to book club and it was crazy, crazy good.  We had it with Wheat Thins, defeating the gluten-free-ness of the dip itself, but I think red bell pepper spears and carrot sticks would have been great as well.  It’s on my “Must Make” list*.

I think this recipe has changed my life.  It.  Is.  Amazing.  It’s not the quickest thing ever, but it is so delicious, so flavorful, so… Kaki.  Kaki, you have to make this.  I added torn-up corn tortilla pieces during the last 3-4 minutes of cooking, and then added some salsa at the table, for the best vegan chilaquiles/migas EVER.  (See Wikipedia links above for the battle-of-terms for this type of dish.  Or do you know of an even closer term?  Do share.)

Joy the Baker’s Raspberry Almond Cupcakes with Chocolate Ganache (and I whipped the frosting, per Alton and Martha’s advice) 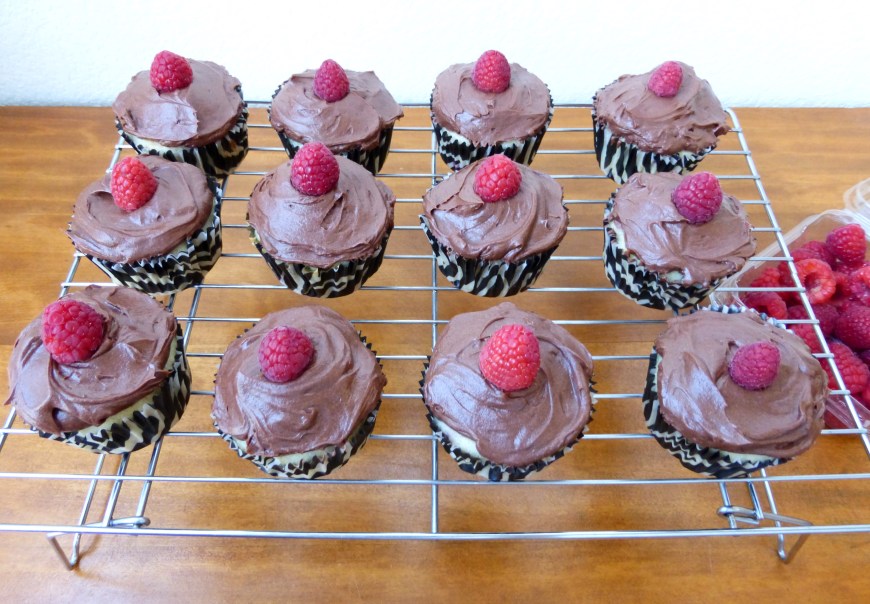 Cooper asked for cupcakes for her birthday, so obviously, Joy it was.  These were really good, but the best part was finding out that chocolate chips + simmering** cream + time + hand mixer = the most amazing whipped chocolate frosting to ever exist.  You think I’m overstating that?  No.  No, not in the least.

Lastly, my lunches this week have been a bowl of about 1/2-2/3 cup roasted sweet potatoes with caramelized onions ala this TheKitchn recipe, nuked up with maybe a 1/4 cup of black beans and a few spoonfuls of a great tomatillo salsa (made from the Fonda San Miguel cookbook, at a friend’s birthday party where she picked like 8 recipes from the book and we just cooked and ate for hours, it was the perfect birthday party).  Heaven, my dear, you’ve got to try it.

I’m going to get to see you and Laredo very soon!  Farmer’s market with Elvis impersonator, here I come!!

**I, um, actually over-simmered this.  As in, was doing dishes with my back to the stove and when I turned around it was justhisclose to boiling over.  I had to strain the cream into the chocolate, then had to strain the ganache twice to get all the little curdled or whatever pieces out.  Which was a hassle.  Don’t let the cream boil for an unknown amount of time, or you will be straining away the afternoon.  Stilled turned out, but yeah, more effort than it needed to be.

P.S.  This is what my kitchen looked like last Saturday.  Clockwise from left that’s: yogurt making, onions caramelizing, sweet potatoes ready to roast, ganache setting-up and cupcakes ready to be frosted.  Holy shoot, too much!  But tasty, so, so tasty.