Kaki, it’s a new year!  It’s 2014!  I’m still having trouble typing that with any regularity at work.  “2013” was just so nicely close together, with that 2 and 1 and 3 all mere keys away.  Reach my index finger one key further right?  My brain can’t handle it yet.

Now, as you may know, Kaki, I’m a rather frugal person.  And because of that I don’t feel like I drastically overspent for Christmas, don’t feel any major credit hangover from the holidays.  However, it became quite obvious in December that HEB was getting a lot of my money, way more than usual.  Maybe it was the uptick in bottles of wine or bars of chocolate, or just the general festive get-togethers for which food played a central role.  No matter what it was, January came around and I felt like I didn’t want to spend quite as much at the grocery store for awhile if I could.

And thus the kitchen clean-out began!  With a few exceptions (I got a good deal on frozen fish on my parents’ latest Costco trip, and Cooper and Holly and I made some freezer meals that will be another post soon) I am trying to fully clean out my fridge, freezer, and pantry before I get anything, anything else from the grocery store this month.  I have cleaned and re-organized them all (which feels amazing) and am slowly working my way through half-empty bags of frozen broccoli and that last sliver of ham leftover from Cooper’s baby shower mini-quiches.

My favorite part of this exercise has been the creative problem-solving it causes.  I’ve done a lot of, “Okay, as of right now I’m out of onions, but I have some green onions left to work with, so that’s manageable.”  I’m out of oats for oatmeal, so breakfasts have been interesting.  This morning, lying in bed, stomach rumbling, I did a mental list of what I had in the fridge.  “I have a few flour tortillas,” I thought, “okay… and peanut butter!”  We used to eat that for breakfast all the time growing up, and it was great to remember it again.  (Also, it tastes pretty good, even though it may sound a bit odd.  I’ll make one next time you’re over just to prove it if you have any doubts.)

And there have been a ton of great moments like that, using what I have on hand in a new way, experimenting.  I made a nicely successful fish and frozen broccoli saute with some leftover honey mustard sauce: 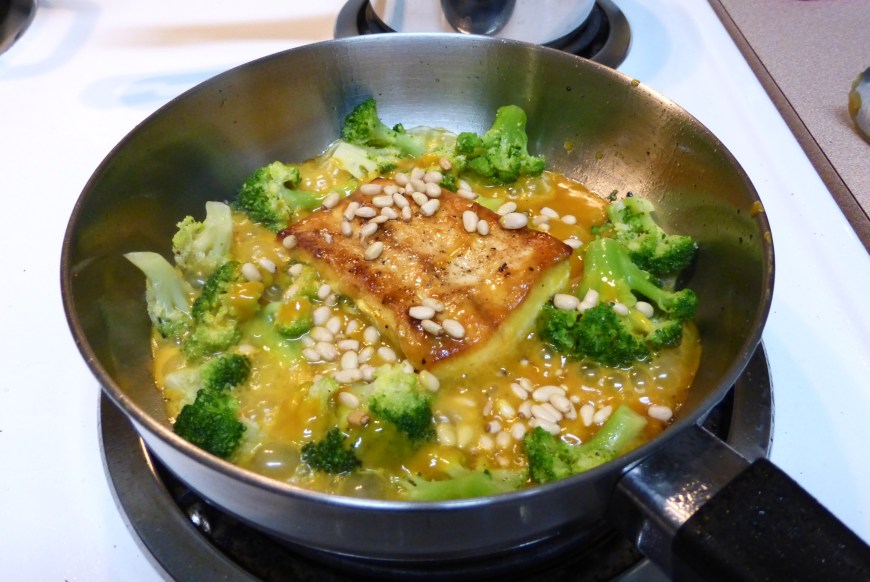 I made poppyseed palmiers using a leftover half-can of poppyseed filling and the puff pastry that was in my freezer:

(I used Ina Garten’s palmier recipe, but baked on the first side for closer to 9 minutes, and the second side for about 4.  Freakin’ delicious.  Also, while the poppyseeds were tasty, it didn’t add a whole lot to the final cookie, but it did make them look a bit messy; it’s not an idea I’ll return to, most likely, but a fun thing to try nonetheless.)

I made a chicken noodle soup that wasn’t anything to write home about.  I made a simple spaghetti with the frozen remnants of that great marinara sauce we made late last summer.  I used one last lonely potato and some beans and canned diced tomatoes to make a take on this.

But the very best thing I’ve made in this massive ingredient clean-out was this shredded carrot salad.  I didn’t add the raisins, or walnuts, or parsley suggested.  Just dressing and shredded carrots.  The dressing, Kaki, oh the dressing is just perfect.  And I almost always have carrots on hand, so it was an absolute winner, I cannot wait to make it again.

And speaking of cannot wait, while I’m working through what I already have I’ve been socking away the recipes I’m just dying to make once I return to buying groceries.  Here’s the list so far:

Jamie Oliver’s Chicken in Milk (TheKitchn just raved about it)

They all look and sound so fabulous to me right now, I can’t wait to take a crack at them!  But first, I’m brainstorming what else to make using what I already have.  I have some arborio rice on hand, and some ham, some frozen corn, and half a can of diced tomatoes… sounds like risotto to me!

Hope you’ve been well, Kaki.  Miss you, can’t wait to hear how January has been treating you!

P.S.  I’m thinking about doing a belated January Cure, actually, since it sort of aligns with what I’m already doing.  Plus one of my new year’s resolutions was to redo that huge built-in bookcase in my dining area.  I want to re-organize all the books… and make room for a little bar area, too!  I’ll be sure to take before and after shots to share.

P.P.S.  Um, can we talk about something?  I am newly addicted to Doctor Who.  Like, crazy addicted.  As in my friend Anna came over the day after Christmas and suggested we watch it, and in the less than three weeks since then I have obsessively watched the first three seasons and into the fourth.  Oh my god oh my god, Kaki, it’s just as good as everyone says it is and I just adore it and it’s like when I finally watched Firefly or Sherlock and finally got why everyone was raving so and man oh man am I loving it!  (Downton Abbey is next on the list of shows to finally get in to.  Can’t wait.)

P.P.P.S.  I swear your very belated Christmas gift is going in the mail this week.  It is going to happen.  Seriously.