I started out making this with a relatively particular vision in mind, which, as you know, is a surefire way to get something else entirely.  Thankfully, in this instance the something-else-entirely is still crazy good.

When I read this recipe about a month ago, I got an instant image of myself taking a bottle of sparkling wine and a bottle of this syrup to a party, greeting the hostess on her doorstep with hugs and laughs and a casual, “Oh, yeah, I brought a simple little champagne cocktail.  The syrup is delicious, I use it on just about anything.”  (There may also have been a fabulous sparkly cocktail dress involved in this fantasy.)  This was it, this was my new holiday go-to, my easy way to impress a crowd, this was going to be it.

So I bought the pear juice; delicious.  I had the cardamom from a chai recipe I made last year (and gifted, as it were).  Assembling the syrup did take overnight but the hands-on time was all of about two minutes.  Then, when later that week Cooper invited me over for dinner, I picked up a budget-friendly bottle of cava (for me) and a bottle of club soda (since Cooper’s abstaining on behalf of the little one, like you do).  We were set.

And we poured our syrup into champagne flutes and I poured in some cava and… meh.  Pretty good, but the cava was just as good on its own.  I’d envisioned a cheap sparkling wine that would be made vastly improved by a dose of pear-and-cardamom goodness.  And maybe I just didn’t have the right cheap sparkling wine (although, it was under $8, so… not sure really where to go from there?).  But, I was disappointed that this wasn’t the be-all, end-all, choir-of-angels-singing-in-the-background discovery I’d hoped.

So today, while working from home, I realized I needed pictures for the blog and as it turns out pictures really are better with natural light just like everyone says and well why don’t I take a break and take a few pictures of this syrup.  I was out of cava but had a bit of club soda left, so we’ll just take pictures of the mocktail* version that Cooper had enjoyed.

Kaki.  The version with the club soda was so much better!  I couldn’t believe it.  I’d taken pictures and, well heck, it’s all made up, might as well enjoy it, and I was shocked at how good it was.  The sweet from the pear, the warm spice from the cardamom, the crisp, clean taste from the club soda.  The flavors that had competed with the sparkling wine came through fabulously with the club soda.

Now, I’d still like to make this a cocktail.  If I had some on hand I’d have tried adding gin, or even a light rum or vodka.   But that does take away from the simplicity of its originally intended cute-item-or-two-to-bring-to-a-holiday-party.  I can’t just show up at a party toting the whole bar**.

So, I think I’m revising my use for this syrup to an at-home kind of thing.  It will come in handy in that I have more and more pregnant friends these days, and this is a special drink that I can spike and leave theirs un-spiked.  Everyone wins.

Place the cardamom pods on the counter.  Using the bottom of a heavy pot, gently press on the pods until they split open.  You should be able to see the little black seeds in each pod.

In a small pot, combine the water, sugar, and bruised cardamom pods.  Heat mixture over medium to medium-low heat until simmering, stirring at first to get the sugar to dissolve.  Simmer mixture for 8-10 minutes.

Add the pear juice, and let mixture return to a hearty simmer.  Remove pot from heat, and let cool for about an hour.  Once relatively cool, set pot in refrigerator for the mixture to infuse overnight.

8-24 hours later, strain the mixture into a small bottle.  Add the lemon juice to the bottle.  Shake to make sure all the ingredients incorporate.  Shake well before each use of the syrup, as the sediment from the pear juice will settle quite a bit. 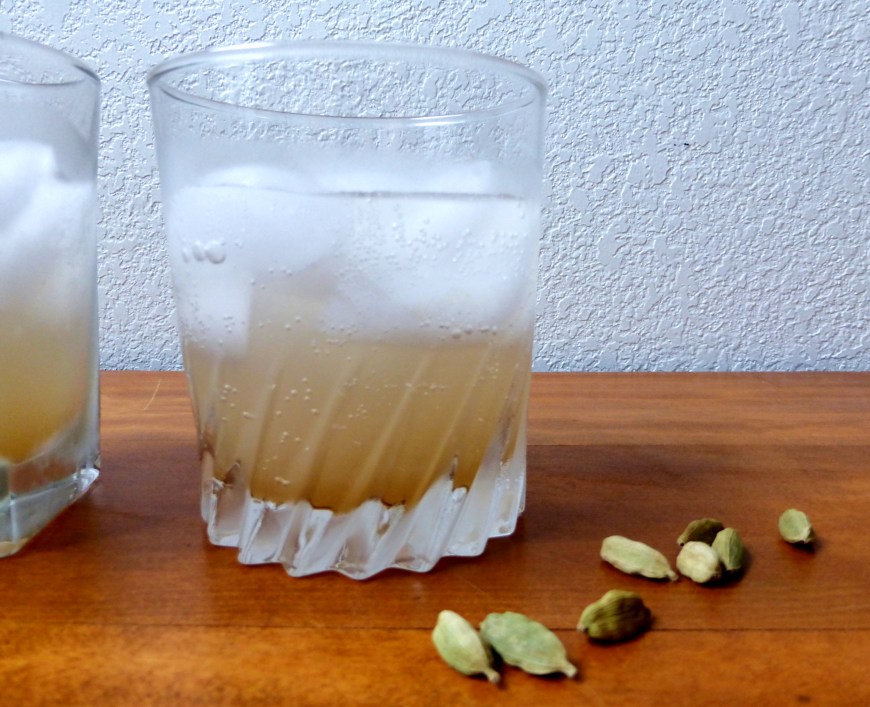 Spike with 1-2 tablespoons of gin or rum or vodka, if desired.

*I’m actually not a fan of this word, but neither am I fan of the term virgin drink, so, until I find an alternative, mocktail it is.  Ugh, what a terrible word.

**Note, I have actually done just this very thing in the past.  On multiple occasions.  Sometimes I want to share a fabulous cocktail even though I’m not hosting!  Is this stepping on the hosts/hostesses toes?  I’ve started to worry about this.

P.S.  I actually tried two versions of this syrup, one with cardamom and one with just combining the pear juice and some ginger simple syrup I’d made earlier this year (it keeps virtually forever in the fridge).  The ginger one just didn’t work as well as the cardamom version did.  It was pretty good, but I just didn’t think the flavors complimented each other quite as well.

P.P.S. Kelli’s suggestion to use this over ice-cream?  Yup, tested that.  You know, for science.  It is, unsurprisingly, delicious.  Would be especially good with a combo of vanilla bean ice cream, a heavy drizzle of this syrup, and some candied nuts of some variety.

P.P.S. As I was typing the title for this post, it hit me: pancakes.  Must try this over pancakes!

One thought on “Pear-Cardamom Syrup”